This week Boris Johnson announced a new plan to finance social and healthcare through revised tax rules. These new measures will contribute financially to the UK’s centralised health system, helping both the NHS after the difficult environment it has endured and shake-up adult social care funding over the long term. There was also a  surprising decision to break the triple-lock pledge on the state pension and a dividend tax increase to boot.

The Health and Social Care Levy

The recently passed bill will see national insurance contributions for employees, employers and the self-employed rise by 1.25% in April 2022. However, as of April 2023, this additional tax will be more appropriately branded a “Health and Social Care Levy” and will appear as a separate line item on every individual’s tax records.

It does not take a stroke of genius to deduce that the decision to increase the tax take has sparked controversy across specific groups. For example, graduates in England are incensed. When these new rates are introduced graduates finding employment will see deductions totalling 50% of their wage before it reaches them. The deductions take account of loan repayments, income tax and national insurance, leaving many feeling unfairly treated.

Those opposed to the tax have linked it to students suffering to pay for a wealthy older generation, but forgetting to mention the same % increase hitting dividends. Incidentally, the dividend tax move will penalise entrepreneurs, many of whom sacrifice everything and pay themselves dividends to compensate for small salaries and no paid holidays before achieving success. 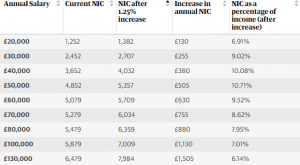 Changes to how individuals pay for social care in England have been included in this bill. The PM promises the new structure will mean no one will need to sell their homes to receive social care.

Currently any individual holding assets with a value of more than £23,350 is liable to contribute to their social care costs and are not eligible for local authority support. This limit has been increased to £100,000, and anyone between £20,000 and £100,000 will receive some support which will scale up in line with their assets.

The minimum income guarantee promises to increase the amount of income that recipients can retain after contributing to care costs in line with inflation from April 2022.

A cap on the total amount an individual can pay towards social care has been capped at £86,000 from April 2023.

The triple lock promise for state pension was put in place to ensure that pensioners were not left behind in an inflationary environment: Assurance that their pensions would increase by one of the three following each year:

Currently, the highest of the three is the average wage increase and this is what state pension recipients would expect their pension to increase by.

The problem this year, as we have been highlighting over the past few months, is bottlenecks and shortages, not just in traded goods but in the labour market, have contributed to vastly higher average wage increases – almost 9%. The government believes wage rises will start to moderate and thus it isn’t appropriate to pass on an increase of this magnitude to pensioners.

If the government honoured the triple-lock pledge, state pensioners would be £822 per year better off. However, the burden on the taxpayer would be around £5.4bn a year and it is understandable why an overinflated wage growth figure would not be an appropriate benchmark to use this year.

Tackling social care was never going to be easy and we may yet see further measures as time passes.

The National Insurance increase will raise a substantial sum, ditching the triple lock will side-step a massive future bill and higher dividend taxes raises little while taking a swipe at entrepreneurs. Boris has taken some bold steps, without doubt annoying many to keep the health of the country moving forward.