Evergrande, one of China’s largest property companies, is in trouble. For President Xi this is a significant test of his willingness to tackle excessive debt concentrated in China’s property sector and rising wealth inequality. In doing so he may trigger the most significant event China’s financial system has faced for several years.

Evergrande is currently the world’s most debt-ridden property developer. The company is grappling with a severe liquidity crisis and a staggering debt pile of over $300 billion. This has been built up through aggressive expansion, not all property related. For example, Evergrande bought Guangzhou FC, a member of the Chinese football super league. Moreover, as part of its growth strategy, the developer acquired a landbank capable of accommodating housing for 10 million people!

Why Have Difficulties Arisen Now?

In Evergrande’s case they started to offload properties at major discounts placing them on a slippery slope. As a cash shortfall emerged it became evident they were unable to meet interest payments on existing debts and this triggered major uncertainty in the minds of investors.

Some media outlets have started to draw comparisons with the collapse of US investment bank Lehman Brothers, which occurred over a decade ago. The domino effect which triggered Lehman’s demise, and sparked a global financial crisis, looks much less likely this time around. Why?

While Evergrande owes lots of money they have borrowed from lots of entities -reportedly to over 170 domestic banks and over 120 other financial firms. This means the debt, while large, is well spread across the financial system; and their loans equate to 0.2% of total loans outstanding in the Chinese banking sector. Moreover Evergrande holds land, which remains attractive to prospective asset buyers.

The question now is how the Chinese government will react? To hazard a guess at what they may do it is necessary to look at the broader property market, and to understand their major policy objectives.

Housing is of major importance to the Chinese economy. The residential property market equates to around 20% of China’s gross domestic product (GDP). Real estate in general is around 30% of GDP.

Housing is therefore key to the financial wellbeing of its people. It is estimated that 40% of household wealth is based on property making the sector of systemic importance to the health of the economy.

Ironically, housing is also a source of rising inequality. Those with and those without property marks a tremendous gulf. This has caught the eye of President Xi. If he ignores the warning signs of a yawning gap, he may stoke unrest hence the need to tackle excesses now rather than allow the situation to grow worse.

With this level of importance residing in the property sector, Chinese policymakers are unable to stomach speculation by investors and developers. Growing debt piles and developer liquidity issues are symptomatic of such speculative activity, and contagion represents an associated and growing risk.

Consequently, property developers are under scrutiny, and being managed centrally. Unfortunately for Evergrande, they are the proverbial sacrificial lamb and by making an example of them the authorities are sending a strong signal to others to act responsibly. 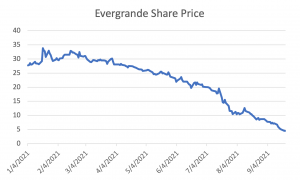 On Monday, Evergrande’s share price fell 17% valuing the business at $3.54bn (with $300bn of debt it isn’t difficult to draw conclusions that there is a problem).

Since the start of the year the company’s stock price is down around 85% and it seems likely that their survival is contingent on whatever the Chinese authorities decide is their fate.