Is the US Federal Reserve having reservations?

Home Our Blog Is the US Federal Reserve having reservations?
Share this page

As 2021 draws to a close and a New Year begins, central banks have been formulating policies for a world that is facing increasingly complex inflation and growth issues.

In the US the Federal Reserve Bank (the Fed) commenced its year-end meeting early in the week, concluding with a press conference on Wednesday. This was delivered by Federal Reserve Chairman Jerome Powell. (As we write this, we note the Bank of England has just increased rates in the UK to 0.25% from the current 0.10%)

Powell, recently reappointed for another term, arguably faces his biggest challenge yet at the World’s most important central bank. The Fed is transitioning policy from an economy-stoking stance to one more focused on keeping inflation under control. We discuss this later in more detail.

It seems the Fed are now less convinced about inflation being ‘transitory’, or temporary, as officials once thought. This comes after months of championing the whole idea of ‘temporary’ inflation (conveniently so one might say!)

The most often quoted measure of inflation is the US consumer price index. This rose by 6.8% in November. Thus, inflation is increasing at its fastest pace in nearly 40 years; and will potentially run hot again in December. 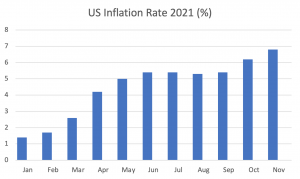 Lifting the Federal funds rate is arguably the Fed’s most powerful tool for pushing back on inflation. Doing so would slow demand by raising borrowing costs on the likes of mortgages, business loans and auto debt. At this point the economy appears to be in strong health and able to cope, so it may well be appropriate to go through with a rate rise; particularly if Powell is true to his hawkish stance on inflation. However, Powell has recently argued that raising rates will do nothing to counteract shortages and blockages that have sown the seeds of the recent goods price inflation, nor would it counteract wage inflation stemming from a shortage of labour. This seems like double standards and possibly confusing for many.

In another twist associated with monetary policy the Fed announced in November that it would slow crisis-driven asset purchases i.e. buying bonds to help keep yields under downward pressure. The initial step taken by them involves cutting total purchases by $15bn per month, meaning they would hit their target reduction level by June 2022.

Recently though Jerome Powell stated a more aggressive stance, aiming for an earlier completion and curbing asset purchases by $30bn per month. At their recent meeting this week Fed officials appear to have given this new proposed the green light.

Bringing the taper to an end faster is a significant development for market watchers. The Fed has long signaled that it would hold its key interest rate steady until it halts its non-conventional balance sheet expansion. This suggests interest-rate hikes could be on the table earlier than the market had anticipated, possibly as early as March 2022.

However, management of an economy is never straightforward. The new Omicron variant has the potential to rip new policies apart and leading to a less hawkish stance by the Fed. On this one time will tell.

Following the end of the December policy meeting, the US rate setting body at the Federal Reserve, the Federal Open Market Committee (FOMC), kept its main interest rate at a rock bottom figure of 0-0.25%.

However, the FOMC also signaled support for a more assertive approach to tightening policy. When the projections were last updated in September, policymakers were split on the prospects of lifting the rate from near zero levels in 2022 to now signaling  3 increases in 2022; with 3 more penciled in for 2023 and a further 2 increases in 2024.

In many ways the Fed appears to be a lot less reserved now than it has done for some time. The evidence for this statement comes for a dramatic shift in their dovish projections from 3 months ago to favoring more aggressive tactics in their quest to tame surging inflation i.e. more hawkish on interest rates and moving at a faster pace in relation to tapering.